Who Owns The Media? The 6 Monolithic Corporations That Control Almost Everything We Watch, Hear And Read 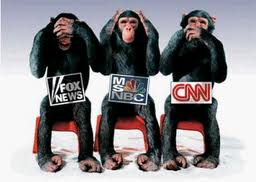 Back in 1983, approximately 50 corporations controlled the vast majority of all news media in the United States.  Today, ownership of the news media has been concentrated in the hands of just six incredibly powerful media corporations.  These corporate behemoths control most of what we watch, hear and read every single day.  They own television networks, cable channels, movie studios, newspapers, magazines, publishing houses, music labels and even many of our favorite websites. Sadly, most Americans don’t even stop to think about who is feeding them the endless hours of news and entertainment that they constantly ingest.  Most Americans don’t really seem to care about who owns the media.  But they should.  The truth is that each of us is deeply influenced by the messages that are constantly being pounded into our heads by the mainstream media.  The average American watches 153 hours of television a month.  In fact, most Americans begin to feel physically uncomfortable if they go too long without watching or listening to something.  Sadly, most Americans have become absolutely addicted to news and entertainment and the ownership of all that news and entertainment that we crave is being concentrated in fewer and fewer hands each year.

The six corporations that collectively control U.S. media today are Time Warner, Walt Disney, Viacom, Rupert Murdoch’s News Corp., CBS Corporation and NBC Universal.  Together, the “big six” absolutely dominate news and entertainment in the United States.  But even those areas of the media that the “big six” do not completely control are becoming increasingly concentrated. For example, Clear Channel now owns over 1000 radio stations across the United States.  Companies like Google, Yahoo and Microsoft are increasingly dominating the Internet.

Click the link below for the rest of the article…

via Who Owns The Media? The 6 Monolithic Corporations That Control Almost Everything We Watch, Hear And Read.

This entry was posted in Media, Politics, Uncategorized and tagged mainstream media, media, news, who controls the media, who owns the media. Bookmark the permalink.

2 Responses to Who Owns The Media? The 6 Monolithic Corporations That Control Almost Everything We Watch, Hear And Read